Ego Is the Enemy 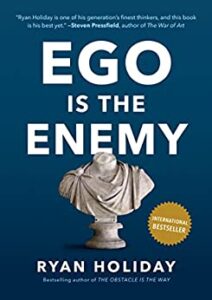 Ego Is the Enemy by Ryan Holiday

Find it on Amazon

Covers mindset, a modern summary of stoicism. Taking responsibility for oneself.

There is an opportunity in incremental improvement. Defragmenting life, the environments you are in, daily. That work, that action accrues.
Always ask questions around the contrasting case.
Beware the eagerness of passion.

“Act with fortitude and honor,” he wrote to a distraught friend in serious financial and legal trouble of the man’s own making. “If you cannot reasonably hope for a favorable extrication, do not plunge deeper. Have the courage to make a full stop.”

This is the opposite of:

It’s interesting to watch a man with his dick in a hornet’s nest try to solve the problem by tossing his balls in as well.

The first principle is that you must not fool yourself—and you are the easiest person to fool. —RICHARD FEYNMAN

The ego we see most commonly goes by a more casual definition: an unhealthy belief in our own importance. Arrogance. Self-centered ambition.

performance artist Marina Abramović puts it directly: “If you start believing in your greatness, it is the death of your creativity.”

When we remove ego, we’re left with what is real.

We will learn that though we think big, we must act and live small in order to accomplish what we seek.

^^**be action and education focused, and forgo validation and status,**^^

Those who know do not speak. Those who speak do not know. —LAO TZU

To be somebody or to do something. In life there is often a roll call. That’s when you will have to make a decision.”

Having authority is not the same as being an authority. Having the right and being right are not the same either. Being promoted doesn’t necessarily mean you’re doing good work and it doesn’t mean you are worthy of promotion (they call it failing upward in such bureaucracies). Impressing people is utterly different from being truly impressive.

“A man is worked upon by what he works on,” Frederick Douglass

“It is impossible to learn that which one thinks one already knows,” -Epictetus

A flash of inspiration: I want to do the best and biggest ever. Be the youngest . The only one to __. The “firstest with the mostest.” The advice: Okay, well, here’s what you’ll need to do step-by-step to accomplish it. The reality: We hear what we want to hear. We do what we feel like doing, and despite being incredibly busy and working very hard, we accomplish very little.

Notes: 1) The typical result from giving advice to people who ask what they should do.

How can someone be busy and not accomplish anything? Well, that’s the passion paradox.

The critical work that you want to do will require your deliberation and consideration.

An anteambulo proceeded in front of his patron anywhere they traveled in Rome, making way, communicating messages, and generally making the patron’s life easier.

There’s one fabulous way to work all that out of your system: attach yourself to people and organizations who are already successful and subsume your identity into theirs and move both forward simultaneously.

Instead, it’s about seeing what goes on from the inside, and looking for opportunities for someone other than yourself.

There is an old saying, “Say little, do much.” What we really ought to do is update and apply a version of that to our early approach. Be lesser, do more.

Imagine if for every person you met, you thought of some way to help them, something you could do for them?

Maybe it’s coming up with ideas to hand over to your boss. Find people, thinkers, up-and-comers to introduce them to each other. Cross wires to create new sparks. Find what nobody else wants to do and do it. Find inefficiencies and waste and redundancies. Identify leaks and patches to free up resources for new areas. Produce more than everyone else and give your ideas away

I have observed that those who have accomplished the greatest results are those who “keep under the body”; are those who never grow excited or lose self-control, but are always calm, self-possessed, patient, and polite. —BOOKER T. WASHINGTON

Our own path, whatever we aspire to, will in some ways be defined by the amount of nonsense we are willing to deal with.

Take it. Eat it until you’re sick. Endure it. Quietly brush it off and work harder. Play the game. Ignore the noise; for the love of God, do not let it distract you. Restraint is a difficult skill but a critical one.

A person who thinks all the time has nothing to think about except thoughts, so he loses touch with reality and lives in a world of illusions. —ALAN WATTS

Don’t live in the haze of the abstract, live with the tangible and real, even if—especially if—it’s uncomfortable.

There’s no one to perform for. There is just work to be done and lessons to be learned, in all that is around us.

The question to ask, when you feel pride, then, is this: What am I missing right now that a more humble person might see?

“You can’t build a reputation on what you’re going to do,” was how Henry Ford put it.

Materiam superabat opus. (The workmanship was better than the material.)

Make it so you don’t have to fake it—that’s the key.

Every time you sit down to work, remind yourself: I am delaying gratification by doing this. I am passing the marshmallow test. I am earning what my ambition burns for. I am making an investment in myself instead of in my ego. Give yourself a little credit for this choice, but not so much, because you’ve got to get back to the task at hand: practicing, working, improving.

Myth becomes myth not in the living but in the retelling. —DAVID MARANISS

This is what happens when you start to think about what your rapid achievements say about you and begin to slacken the effort and standards that initially fueled them.

It’s time to sit down and think about what’s truly important to you and then take steps to forsake the rest.

So why do you do what you do? That’s the question you need to answer. Stare at it until you can. Only then will you understand what matters and what doesn’t.

One of the symptoms of approaching nervous breakdown is the belief that one’s work is terribly important. —BERTRAND RUSSELL

With success, particularly power, come some of the greatest and most dangerous delusions: entitlement, control, and paranoia.

It is not enough to have great qualities; we should also have the management of them. —LA ROCHEFOUCAULD

If I am not for myself who will be for me? If I am only for myself, who am I? —HILLEL

Remind yourself how pointless it is to rage and fight and try to one-up those around you.

DON’T BE DECEIVED BY RECOGNITION YOU HAVE GOTTEN OR THE AMOUNT OF MONEY IN YOUR BANK ACCOUNT.”

The evidence is in, and you are the verdict. —ANNE LAMOTT

Generosity, which we all admire, must stop short of either profligacy and parsimony in order to be of any use.

Failure and adversity are relative and unique to each of us.

Almost without exception, this is what life does: it takes our plans and dashes them to pieces. Sometimes once, sometimes lots of times.

We must deal with the situation in order to move past it. We’ll need to accept it and to push through it.

Goethe once observed, the great failing is “to see yourself as more than you are and to value yourself at less than your true worth.”

Plutarch finely expressed, “The future bears down upon each one of us with all the hazards of the unknown.”

As they say, this moment is not your life. But it is a moment in your life. How will you use it?

Booker T. Washington most famously put it, “Cast down your bucket where you are.” Make use of what’s around you. Don’t let stubbornness make a bad situation worse.

how do you intend to endure tough times?

the less attached we are to outcomes the better.

This, too, can bear;—I still Am Belisarius!

If we persist in wanting, in needing, we are simply setting ourselves up for resentment or worse.

If you shut up truth and bury it under the ground, it will but grow, and gather to itself such explosive power that the day it bursts through it will blow up everything in its way. —EMILE ZOLA

William A. Sutton observed some 120 years ago that “we cannot be humble except by enduring humiliations.”

It can ruin your life only if it ruins your character. —MARCUS AURELIUS

“Act with fortitude and honor,” he wrote to a distraught friend in serious financial and legal trouble of the man’s own making. “If you cannot reasonably hope for a favorable extrication, do not plunge deeper. Have the courage to make a full stop.”

You must get back to first principles and best practices.

But not everyone is the best possible version of themselves.

The economist (and philosopher) Adam Smith had a theory for how wise and good people evaluate their actions: There are two different occasions upon which we examine our own conduct, and endeavour to view it in the light in which the impartial spectator would view it: first, when we are about to act; and secondly, after we have acted.

When we are about to act, the eagerness of passion will seldom allow us to consider what we are doing, with the candour of an indifferent person. . . . When the action is over, indeed, and the passions which prompted it have subsided, we can enter more coolly into the sentiments of the indifferent spectator.

There is something of a civil war going on within all of our lives. There is a recalcitrant South of our soul revolting against the North of our soul. And there is this continual struggle within the very structure of every individual life. —MARTIN LUTHER KING JR.

Every day for the rest of your life you will find yourself at one of three phases: aspiration, success, failure.

You must sweep the floor every minute of every day. And then sweep again.

Every time you sit down to work, remind yourself: I am delaying gratification by doing this. I am passing the marshmallow test. I am earning what my ambition burns for. I am making an investment in myself instead of in my ego. Give yourself a little credit for this choice, but not so much, because you’ve got to get back to the task at hand: practicing, working, improving.